I had cause to visit the workshop of the oar maker J Sutton, one of the best known names in timber oars. There would be few rowers over 20 years old in the UK who hadn’t used a Sutton blade at least once. The company evolved the timber oar with new technologies (including use of carbon fibre in the ‘CFR’ range) right into the 1990s when one might have thought the timber oar long dead. Indeed, in my previous job in Hong Kong I was surprised to learn that the club had ordered a quad scull set of blades as late as the mid-1990s! One of the old Captains was a bit of a purist!

The company did move into full composite construction for oars, but whilst the timber oars are still being made, the Sutton branded carbon oars are now discontinued. Jerry Sutton has also now retired, but the company lives on in the hands of Mark Stanley and the oars are now built alongside assorted vintage timber boats being restored and repaired in the workshops at Romney Lock, Windsor.

Although most of the current production is for coastal gigs and larger rowing barges, you can still order traditional racing oars for sweep and scull. It is even possible to order ‘trophy’ oars (solid) and blade-only for presentation. If you had wondered where the large oars for Her Majesty’s barge ‘Gloriana’ were made; wonder no more!

I was lucky to meet master craftsman Peter Martin during my visit. He went to work at age 14, beginning his career with oars in 1963 at Aylings. Many younger readers will remember Aylings as a builder of racing boats, but the company had started as an oar maker.

Whilst looking around it was interesting to see a few oars in various stages of production. Peter talked me through a few of the stages that could be seen. 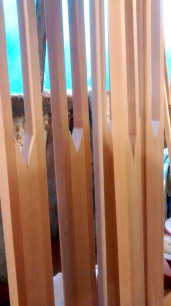 Here are some of the base frames for the oars. The shafts are hollow for most of the outboard length, becoming solid for the blade and also for the sleeve and handle.

With the addition of a back strap and top cap, the shaft takes on the box-girder shape that you might see if you have ever sawn an oar in half. The frame and most of the oar is Spruce, but the stiffer back strap is Ash (old Australian oars used Ironbark, a type of Eucalypt).

Blades: ‘blanks’ awaiting attention, the tip clearly seen with the grain at right angles to the grain on the blade.

The blade area is built up to the correct width with extra timber and an Ash tip is fixed across the end to provide strength. These are the ‘blanks’ ready for shaping. After a rough cut from a template, the work quickly becomes very hands-on and skilled. 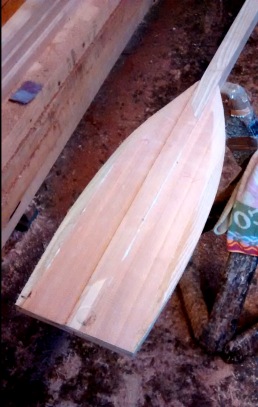 (L) A roughed out blade, face down. (R) A partially complete blade beside a finished example.

Over the years, each craftsman buys and builds the assorted tools needed for the job. Peter’s collection of planes is a perfect example. The most dramatically shaped convex plane has been custom made to suit the job. 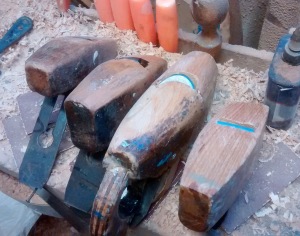 Tools of the trade – hand made planes.

After extensive shaping, then sanding, each oar is varnished and fitted out. Once completed, they await only the call of the coxswain for rowing to commence.

You can visit Sutton Oars at www.suttonblades.co.uk

2 thoughts on “Sutton – a visit to the traditional oar makers” 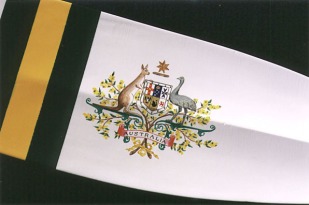 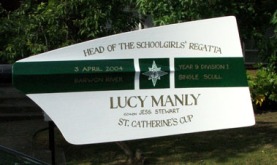 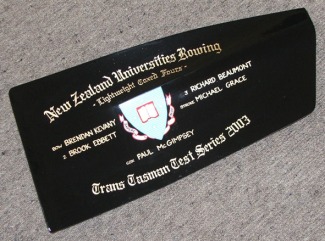 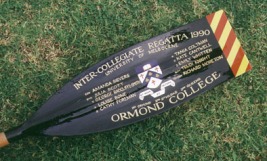 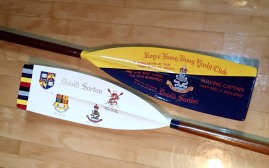 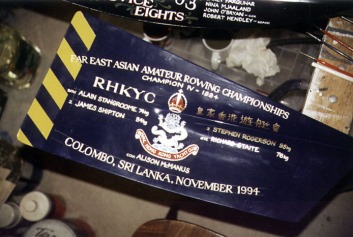 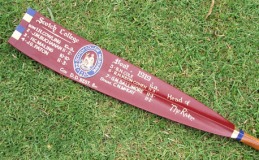 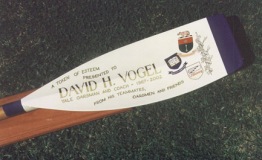 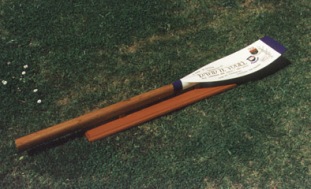 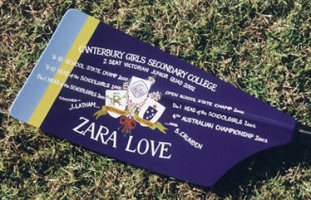